On a whim, I decided to go Up North for a short vacation.  Short = less than 48 hours.  And for those not from the Great Lakes region, "Up North" for the most part means "going to Northern Michigan," or what I would call back home.  Erica is in Vegas for the first part of the week at the PCMA national convention.  I had Sunday off, so after breakfast, I said "I think I'll pack the dog and go Up North."

Oliver (aka Olivier, aka Bugsy, aka Shredder, aka Vicious Squirrel, our Pomeranian/Beagle mix) and I started shortly before noon, trekking the long drive Up North.  He's almost one year old now, and at a whopping 16 lbs, he can shred any stuffed toy, attack any leaf that moves across the sidewalk, and howl at anyone who walks in front of the living room window (as long as the glass is between them, protecting him from strangers).  He's a grade "A" guard dog.  The picture below shows him in all his fury. 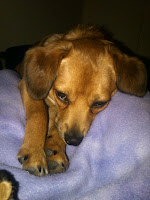 Anyway, I got in sometime between 5 and 6, and went with my mom to the local grocery store to wander the aisles for something for dinner.  Along the way, I found myself in the primative wine section where Boone's Farm and Arbor Mist was found in plenty, and came across some Michigan Wines.  Bingo!  I know what we're doing tomorrow: going vineyard hopping on Old Mission Peninsula!  I told mom that's what we should do, and we agreed that if she could look for old duck decoys at antique shops along the way, she would be in.  I have enjoyed the road along the Wineries of Old Mission Peninsula (WOMP) several times.  However, I've never been to 2Lads on the northern most end of the peninsula, and I haven't been to Chateau Grand Traverse or Bowers in a long time.  On our last trip, a little over a year ago, Erica, my mom, and I enjoyed tastings at Chateau Chantal, Brys, and Peninsula Cellars.

So now that a plan has developed in my spontaneous trip, I feel better about my decision spend $3.30 per gallon both ways in gas.  Snowshoeing sounds in order while I'm here too.  Back in the grocery store, I did start the vineyard hopping early by purchasing a bottle of Chateau Chantal "Nice" Red Wine.  I have a few notes scratched out, and will review in my next post.  I'm still on Central time, so... not tired yet.  I also brought four or five bottles from home that I probably won't drink, but I'm always prepared in case I find a party... which is always possible.  They're harder to find on Mondays and Tuesdays, but maybe I'll just have to start one.
Labels: Travel