I hear many things about wines, vintages, appellations, etc. at the several tastings I attend (obviously).  The number one comment I currently hear on the circuit is "we can't wait for the Vintage 2009 Bordeaux release!"  The second most popular remark I hear these days is "2008 is truly a 'restaurant vintage.'"  The Union des Grand Crus de Bordeaux 2008 Vintage Tasting was no exception.  Several winemakers and representatives kept saying the same thing: this is the year to drink now.  They are referring to more sun, but cooler temperatures in the last half of the Summer, and a longer, warmer Autumn that Bordeaux experienced in 2008.  This allowed for the grapes to ripen longer and slower, producing more sumptuous juice that for the most part "keeps the tannins at bay."  The beginning of the growing season was a bit rocky, as May stole April's showers, making it difficult for fruit flowering, causing a small yield for many producers.  In fact, one representative I spoke with had half the crop of a "normal" vintage.  In all, the above factors produced a vintage that was, in general, soft on tannins, full of juice, and very aromatic, even it its young age.  Thus, you will be drinking 2008 far before 2009, 2005, and 2000.  These "ultra-grand" vintages will require much time in the cellar to breakdown their tannins, and become the round, beautiful, voluptuous nectar that fills our souls and drains our wallets. 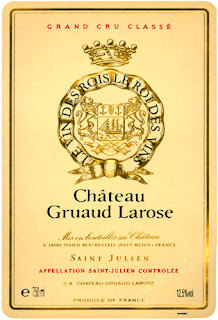 Chateau Gruaud Larose, Saint Julien, 2008
One of my favorites!  Chocolate and dark fruit on the nose.  Light cocoa, spice, and cranberry on the juicy palate, with a dry finish and soft tannins throughout the mid-palate and finish.  It is very approachable, and it had been open at most 15 minutes.  David Launay, managing director of Gruaud Larose, explained that because of the mild year and slightly longer Autumn, the wine is very much ready to drink now, but may be enjoyed for 20+ years.  For those who share his preference in a more balanced, added mineral quality bottle of wine, he recommends an eight year cellaring period to have the most balance of terroir and fruit from the aging of the tannins.  However, as stated, this wine may certainly be enjoyed now with a more forward, juicy presence.  More information about this winery was featured in an earlier post of Juicy Tannins, and can be found here.

Chateau Haut-Bages Liberal, Pauillac, 2008
The nose is fruity and full of red roses.  The palate is slightly dry on the front, has flavors of black cherries, raspberry, minerals, and spice in the middle, and a dry finish wrapped in medium-mild tannins.  It could use a few years in the cellar to round out the palate.  The winery, which lies behind Chateau Latour, produced about 10,000 cases in 2008, which was "a good year," according to renowned Claire Villars-Lurton, manager of the estate, and granddaughter of the founder of the Taillan Group, Jacques Merlaut, which also owns properties such as Chateaus Gruaud Larose and Chasse-Spleen.  More information about Chateau Haut-Bages Liberal can be found on their website and from the WineDoctor here. 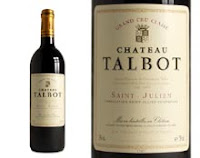 Chateau Talbot, Saint Julien, 2008
Very soft plum and cherry on the nose with a palate of rich fruit and tart cherry.  The feel is round and juicy, slightly light, and semi-dry tannin finish.  The gentleman representing the Chateau informed me of much of the information I shared above concerning the approachability of the wines due to the sunny Summer and long Autumn producing a juicier, fruitier Chateau Talbot.  He recommended the wine be cellared three to five years for optimal flavor and balance.  I very much enjoyed this wine, and made note of it's approachability.  More information of Chateau Talbot can be found on its very nice, user-friendly website, and from the WineDoctor here.

So begins the journey of reviewing the fantastic wines of the Grand Cru Bordeaux 2008 Tasting.  Please look for upcoming posts detailing the profiles of prestigious estates such as Chateaus Carbonnieux, Angelus, Prieure Lichine, Leoville Barton, and Beychevelle, among many others.  Thank you to the Union des Grand Crus de Bordeaux for a fantastic event, and to The Drake for housing us crazy wine folk.
Labels: France Red