I can't believe it's finally here!  Four days away from the big night: The Road to 20 Hospitality Gala 2011!  The 20th Anniversary of the Program's "main event," the project that builds the following year's scholarships, site visits, new equipment, professional student organization funds, and the seed money for the next Gala, will this year be raising enough funds for an endowment that will produce higher scholarships for future students.  The Gala will be held at the JW Marriott Grand Rapids, and we are incredibly excited for the new venue and exciting changes! 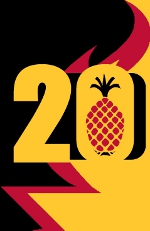 In the above and in previous posts, I keep referring to "we," yet I have never defined "we."  I am referring to our friends who we met first in college, and then developed relationships with over the years through the Hospitality Gala and other projects within the Program.  In some facet, each one of us helped plan, organize, build, and facilitate the Hospitality Galas of our time (makes us sound old).  From this ever-growing experience, we then became friends in school, went on professional education trips together to Anaheim, Orlando, Toronto, Seattle, Washington DC, Las Vegas, and even Honolulu, and simply met for lunch or dinner on a regular basis.  And still today we meet every year for Christmas, and hopefully several times in between.  One big gathering was our wedding... and another wedding is on its way in September for two of our dear friends... and another in a little over a year.  There have been trips to New York City, Boston, Chicago, Detroit, and definately back to Big Rapids to visit Ferris.  I think a group vacation to somewhere tropical is next in order.


There have been some crazy memories throughout the years, whether it has been laughing around a table filled with big yellow buttons, showing our competitive edge at a game of golf, or opening a special bottle of wine for everyone to share, we have made some incredible memories.  People such as Kim from Big Rapids, Joe from Boston/Grand Rapids/Chicago, Lynn from Baltimore, Devin from South Carolina, Alissa from Bay City, Leah & Jason from Novi, and of course, Erica and I from Chicago... these are the people who care so much about this endeavor, that we continually support it every year.  Others who have supported it in the past, or who are on board for the Road to 20 include Scott from Chicago, Amy from California, and Chris from Fort Wayne... and we couldn't be more than happy to see these friends on Saturday.


For instance, Lynn, flying in from Baltimore, reminded me of a time that I, let's say, don't recall... there may have been wine involved and it was totally an accident... but at least I'm always on her mind: "Ben, you'll be pleased to know that I think of you every morning in the shower.  I have a scar on my left wrist that still remains from a cigar burn at our fabulous wine party.  I think fondly of the memories when I see the branding.  That said, 5 years later, the invitation to that wine party and a picture of us, still sits in my kitchen.  It was one of the first times that we started to become as close as we are today, I think."  Again, accident, but good memory... I think... I hope.


And from Leah (Novi, MI), "I have been thinking all week about a juicy Gala story... I don't even know where to start.  From when we were in college, my greatest memories were: the team buildings, running around Big Rapids like crazy people with the catering truck, nights spent in GR as alumni with the Scotch, the after-parties at the townhouses...  The last two years attending Gala as alumni... I have wonderful memories: from Lynn and Devin using the bath tub as a pool... to walking home in Joe's shoes and jacket from the Gate (since Jason left me at the bar).  I have so many wonderful memories and thinking back now, all I can do is smile!!  Being a part of Gala is so much more than putting on an event for our Program... it is about coming together and forming bonds that will last a lifetime.  Just think: if it wasn't for Gala, I wouldn't have known that Jason existed [fiancée: September 2011!!!!]... thank God he drove the truck for two years!  Just think, Ben, who knows if you and Erica would have met without the Hospitality Program!  Needless to say, I love you guys so much and couldn't imagine my life without any of you and I have Gala and the Hospitality Program to thank for it!!!"


These are the kind of memories that the Annual Hospitality Gala from Ferris State University can create.  We hope you are able to support the program in some form or fashion, whether it is in attendance, in sponsorship, or in your thoughts.  If you wish to find out more information about this incredible event, please find the above link with the 'Road to 20" icon at the top left of Juicy Tannins... the future of the Hospitality Industry thanks you from the bottom of their hearts!!  Here's to a fantastic Gala 2011, the 20th Anniversary!!
Labels: Fun and Funny