With the Hospitality Fundraising Gala on everyone's mind, I've decided to continue The Road to 20 with a look at one of last year's memorable moments...

For our annual gathering at Ferris State University's Hospitality Gala, our group of friends attempts to do something meaningful and special for each member of the team.  Whether it is simply lunch beforehand, or making t-shirts for everyone... last year, our friend Alissa made shirts that had a bottle of what resembled Absolut Vodka on the front, labeled "Absolut Big Rapids," with our personalized recipe: "After many nights of appreciation, various educational gatherings, and years of dedication, this distinguished infusion has been established by ten secret ingredients that undoubtedly will change the way you consider greatness."  The ten ingredients being... us.  Wow, we really are elitists. 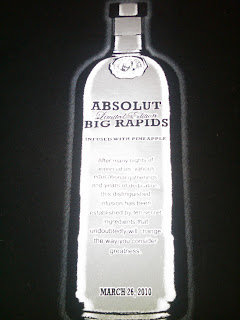 My addition, Project Button, was a funny, creative way to bring us closer together... making fun of our personalities, faults, successes, and whatever else I could think of on a big yellow button for the whole world to see.  The planning started months before Gala 2010, creating phrases to describe my group members, myself, our jobs, etc.  At one point, I sent an email around asking people to describe themselves or other members of the group in a short phrase, 8 words or less.  For example, as the creator, I became the "Button Master."  Leah, always with camera in hand, became "Official Photographer."  Joe's favorite phrase in school, "Alissa, Write That Down."  For our hotel people, "Hotelier... Say it Right!"  You get the idea. 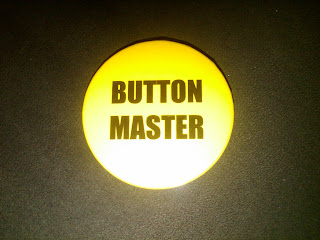 Some buttons were made in mass for the whole group, such as "Distinguished Alumnus," 'Wine Enthusiast," and yes, "Elitist."  I even made some for outside the group, including our Program Coordinator, whose button describes her status in the world of hospitality networking: "Queen."  Her husband: "My Wife is Queen, therefore I am King."  For our professor who takes on a large portion of the Gala guidance and direction: "Just a few more hours..."  Again, you see where I'm going with this.  So if you're counting, you're thinking about 30-40 buttons, right?  Try over 300.  My hands bled in preparation for my ultimate joke.  And I didn't want everyone to pierce their dresses and suits with 30+ pins, so I provided lanyards early in the evening with the first round of buttons.  I also had to carry around the box-o-buttons all evening... but it was totally worth it. 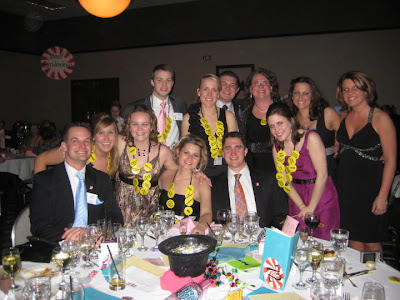 There were a few, let's just say "off the wall" sayings on a few of the buttons, too.  Don't think I'm going to make 300 buttons and not have a few off-color ideas.  This is usually the point where sane people draw the line, and not put thoughts into print.  Well, since I had a button that simply read "THE LINE," you get the idea I don't have much of a filter.  Some more popular buttons of the evening (that is late evening, at the after-Gala party at the local bar) held such phrases as "I had Chinese last night."  That particular button belonged to my friend... whose wife just happens to be from Hong Kong.  As we were all splitting rooms, and the rooms were in close proximity to each other, we each donned the button: "I'm sleeping with 10 people tonight."  Or the winner of the evening, at the bar with 30 buttons to be thrown out into the crowd (after we took ours, of course), that just simply read "Whore."  There also may have been some "Cougar" buttons in the mix.  I don't know if I laughed more giving them out, or coming up with the phrases.  I know, I know... some might call it... distasteful.  But at the time, these just too funny to pass up, and they were definitely popular.  I wouldn't have filtered these ones for the world.

So why would I post this (other than for the few cheap laughs I hope to receive)?  To be honest, it's actually a very fun and funny way to bring people together.  Despite what you write on them, it creates a competition amongst your group members to "get the most buttons."  You can find a button maker from Badge-A-Minit for under $30.  I would recommend buying the button kits on eBay... the cost is much lower.  The button making process does take some time, but once you have the hang of it, it's quite easy... and completely worth it for the fun factor.  That evening, many buttons were exchanged, some were stolen, but they were all enjoyed.  Random people were walking up to us - mind you, there's 300 other people in the room (we just felt like we were the only ones there) - wanting to know how they could get a button.  Our response was to come to the after-party-party at the local bar.  And the string of buttons is a memento that can be taken home, hung on the wall, and be a conversation piece for years to come... "I remember the year of Project Button."
Labels: Fun and Funny